The owner of a large dam in Central Queensland, Australia required high-precision location measurements on several of the facility’s key features. With accessibility and safety of great import, a survey crew minimised risk by using laser scanning. The versatility of the equipment and the crew’s ingenuity made a winning combination as they inverted the scanner to gather data in hard-to-reach places.

Survey work is often straightforward in facilities and travel ways designed for pedestrian use, but what about infrastructure where visitors are the exception and not the rule? Fredriksen, Maclean & Associates received a call from Sunwater, a water service provider, to map their Callide Dam located 12km outside of Biloela. Sunwater wanted a map of the dam and locations of several key features on both the exterior and interior of the massive infrastructure. 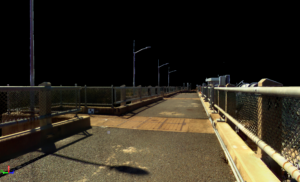 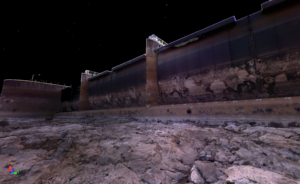 The dam’s interior features proved to be the most challenging. The dam had 12 chambers, measuring 14 meters deep and each had a single manhole for access. Half of the chambers contained important outflow pipes while the other six contained massive counterweights that controlled the dam’s gates.

“Being able to use all Trimble equipment together helps streamline the process of collecting the data, processing the data and presenting the data in multiple formats for the end client’s use.” – Scott Macklyn, Project Surveyor, Fredriksen, Maclean & Associates.

Project surveyor Scott Macklyn and his team proposed laser scanning as it would minimise setup locations and fieldwork time, therefore reducing the inherent safety risks associated with working on the dam’s massive framework. “Scanning the dam would not only be simpler than locating features with a total station, but it would also negate the need to send someone down the 14-meter shaft to take measurements, which would require confined-space training,” said Macklyn.  The survey crew rented a Trimble X7 scanner as well as an inverted tripod from their local Trimble dealer,  UPG (Ultimate Positioning Group). 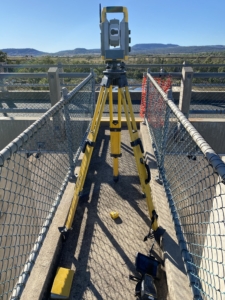 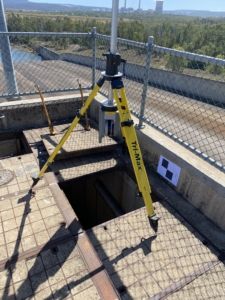 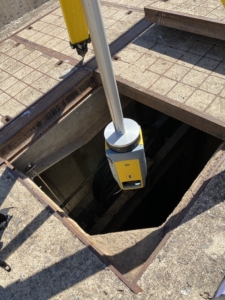 Although the scanner would save time, the riddle of where and how to set up the instrument remained. The crew experimented with an inverted tripod, and hung the X7 scanner upside down into the manhole, and scanned the chamber’s interior. “After the scan was completed and aligned, I was able to preview the scan in Trimble Perspective in the field,” said Macklyn. “We were amazed at the detail the scanner was able to achieve to allow us to visualise places we couldn’t see from 14 meters up.”

The crew used their Trimble S6 total station to establish new control points from a legacy control network Sunwater had established for earlier projects. This ensured the scan data was registered on the client’s legacy datum. However, the crew needed to resolve the issue of combining all the individual scans of the chambers. Because each chamber would be scanned from its singular access point, each point cloud would be isolated. Individual chamber point clouds would need to be tied to each other as well as the point cloud of the dam’s exterior. The crew solved this by performing a series of three scans at the manhole above each chamber. They first performed a normal scan above the manhole. Secondly, they put the scanner on the inverted tripod and scanned above the manhole with the instrument upside down. Lastly, the crew lowered the X7 scanner down into the manhole and scanned the chamber below. This 3-scan method achieved sufficient overlap of interior and exterior points to combine all data quickly and easily by automatic registration. 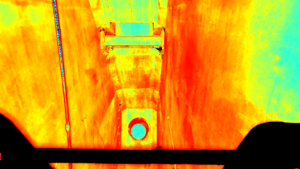 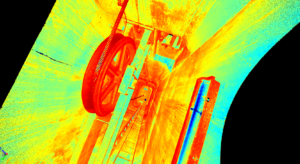 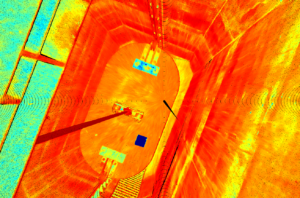 With the Trimble X7, the crew performed 127 individual scans over the course of 2.5 days, an impressive productivity rate. In just two days after fieldwork, the crew processed the scan data in Trimble Business Center and prepared a point cloud as well as a CAD file of the dam layout with the client’s key features prominently displayed. Macklyn was pleased with the results: a global accuracy of +/- 3mm.

Versatile equipment and a willingness to experiment allowed this creative team to develop solutions that met their client’s needs.

New Trimble® X7 plays its part in Scanning History
Trimble Business Center Version 3.61 and GIS Module
Scanning Brisbane’s Gateway Bridge – in half the scans
Power ahead with your TBC skills
Getting the most out of your total station
Save big with these TBC bundles

We use cookies and other tracking technologies to improve your browsing experience on our website, to show you personalized content and targeted ads, to analyze our website traffic, and to understand where our visitors are coming from.

Because these cookies are strictly necessary to deliver the website, refuseing them will have impact how our site functions. You always can block or delete cookies by changing your browser settings and force blocking all cookies on this website. But this will always prompt you to accept/refuse cookies when revisiting our site.